In October, the US Congress approved a $1 trillion infrastructure bill. Over half of these funds will go towards new federal spending items, from repairing and constructing roads and bridges ($110 billion) and expanding high-speed internet access ($65 billion) to improving airports ($25 billion) and revamping rail services ($66 billion). A bipartisan group of lawmakers spearheaded this bill, reflecting the broad consensus in the US that infrastructure plays a key social and economic role in President Biden’s “Build Back Better” framework.

This allocation of funding is just a first step. Policymakers and civil servants now face the challenge of implementing these ambitious plans. UrbanFootprint, a California-based startup, may be able to help.

The company has developed a series of digital tools to help urban planners and public officials make data-driven decisions. Its Analyst platform contains hundreds of datasets (e.g., transit lines, flood and fire risk, poverty indexes) that can be overlaid on top of a map. Users test different scenarios to better understand the impacts of policy decisions like land use changes and mobility investments. Through the platform, users can export polished maps and datasets to share their findings with stakeholders.

Another product from UrbanFootprint, Explorer, has fewer features but is more straightforward to use. Through its web-based portal, users can track data trends, conduct risk assessments, and make more data-driven decisions around initiatives like where to locate vaccine or food distribution sites. UrbanFootprint asserts that these platforms help governments “prioritize infrastructure investments to bolster community resilience” while simultaneously analysing the downstream impacts of these resource allocations.

An integral part of UrbanFootprint’s offering is the data itself. Co-founders Joe DiStefano and Peter Calthorpe noted in their Series A announcement that the funding will enable them to deploy more machine learning algorithms “to increase accuracy, coverage, and localisation” of their datasets. UrbanFootprint has already leveraged machine learning to collect and analyse the data fuelling their maps for food security and eviction risks. Users can also integrate UrbanFootprint’s data into their own application through an API.

Expand its offerings more broadly into new verticals, including solutions for the energy industry to optimize infrastructure investments for minimal risk to assets, environment, and communities; and for the finance industry to improve risk-adjusted returns in support of a more sustainable economy.

Urban planners, energy providers, or government agencies that are looking for insights about urban planning, climate change, and community resilience. 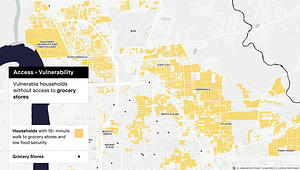 Louisiana is experiencing a severe food access crisis. UrbanFootprint’s data played a key role in developing its Food Security Index, which supports government agencies, cities, and food banks across the state. Some of the insights gleaned from UrbanFootprint’s platform include:

Using UrbanFootprint’s data, government officials and local groups are able to identify households and neighbourhoods at a high risk of food insecurity, and more effectively target the provisioning of their resources.

Read more about UrbanFootprint’s work by visiting their website.

Using data to better inform policy decisions is nothing new. Alex Engler, a fellow at the Brookings Institution, notes that data science methodologies have been used in public policy contexts since at least the latter half of the 20th century. However, the recent rise and increased accessibility of artificial intelligence-powered tools has ushered in a new era of data science. UrbanFootprint’s platform is an excellent example of how policymakers can leverage the latest in digital tools to improve citizens’ lives.

The US infrastructure bill, and accompanying social spending and climate bill, call for ambitious responses to pressing problems, from crumbling bridges to soaring inequality. Similar policy decisions are being made around the world, from the UK and Europe to Latin America and beyond. UrbanFootprint can help leaders more effectively deploy resources and successfully implement these goals.

While there are a host of similar software offerings in the marketplace, UrbanFootprint’s platform stands out for its proprietary datasets and sector-specific insights. Going forward, we could imagine UrbanFootprint specialising even further, targeting a particular niche like 2021 StateUp 21 member Remix has done with the mobility sector.