A vehicle fleet owner seeking to transition to electric faces a major constraint: the difficulty of electric vehicle (EV) charging. Public charging stations are limited in number, load the grid, and may be incompatible with a given EV. This difficulty plays out in the data; charging inconvenience was a key reason why one in five Californian EV owners went back to internal combustion cars between 2015 and 2019.

Electreon looks to solve this through inductive or wireless EV charging. It installs copper coils under roads and ground infrastructure like loading docks and bus terminals. These coils send a current to receivers fitted under EVs, charging them wirelessly whether they are stationary or in motion. Wireless charging provides regular top-ups that increase EV range, free up charging stations, and ultimately enable smaller vehicle batteries. Top-ups are especially salient for heavy-duty vehicles whose high energy needs make electrification difficult.

The global EV stock is projected to expand from 11 million currently to up to 230 million by 2030. Electreon’s wireless charging will gain from the mismatch between rising EV demand and inadequate charging infrastructure. Its focus on electrifying the heavy-duty segment could reduce transportation emissions, as heavy-duty vehicles contribute a disproportionately large amount of transportation-related GHG emissions. EV battery manufacturing produces emissions, so smaller batteries reduce EVs’ total emissions.

The Municipality of Tel Aviv Jaffa was worried about rising air pollution. Noting the significant contribution of transportation to the city’s air pollution levels, it partnered with Electreon and Dan Bus Company to initially pilot Electreon’s wireless charging technology. In this arrangement, Electreon installed conductive coils under a 600 metre portion of a two kilometre bus route, and fit one electric bus with its receivers. 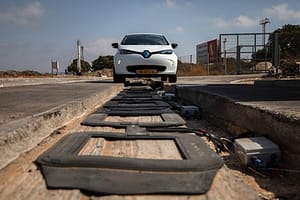 Image by Tamir Kalifa for The New York Times

The pilot was a success. Regular top ups enabled the special Dan Bus Company bus to reduce its vehicle battery capacity by 90% and less time spent charging increased hours of operation. These results led to an expansion of the partnership; in late 2021, Electreon inked a $9.4 million, five-year agreement to supply 200 Dan Buses with wireless charging at city terminals.

Electreon’s technology is gaining traction with government transportation actors. Frost and Sullivan, a global consultancy, sees Electreon installing its technology in more than 150 locations in Israel and Europe by 2025. This is no mean feat considering governments are often hesitant to engage innovation. While some of this success is rightly attributed to its unique product, we believe it also derives from a smart government engagement playbook.

It has chosen B2B2G arrangements for its pilots, leveraging more established players’ reputations and connections. This has enabled it to get work across Europe despite not having a prior local presence. We’ve also seen GovTech startups hire experienced public servants for the network and reputational effects. Here, Electreon is hard to beat––it recently hired former Israeli President Reuven Rivlin as Company President.

Electreon’s future success depends crucially on the electric battery. Michael Webber, an energy expert, warns that disruptive innovation in battery capacity could hurt its fortunes. Electreon tells us it expects exponential improvement, but not large enough to render its offering obsolete. We see another hedge against this––governments prefer to give long-term contracts. As it enters and expands pilots now, it is securing work for between five and ten years into the future.