Sea levels are rising at a rate of about one-eighth of an inch per year, due to thermal expansion caused by warming of the ocean and the increased melting of land-based ice such as glaciers. This increase in sea levels is likely to accelerate coastal erosion. Eight of the ten largest cities in the world are near a coast, and coastal erosion is already estimated to cost $500 million every year in the US alone. Scalable, environmentally-responsible solutions are sorely needed to combat the threats accompanying rising tides.

ECOncrete has developed a bio-enhancing concrete technology that provides ecological advantages and superior structural performance for any marine infrastructure project. The technology meets international concrete standards (i.e., EN, BS, ASTM and AS standards) and integrates seamlessly into any project. It includes a multi-layered approach:

The application of the technology results in a healthy ecosystem developing on the concrete, quickly generating a layer of bio-protection, strengthening and protecting the structure and reducing maintenance. The increased biodiversity also improves water quality and serves as a natural carbon sink, actively sequestering CO2 during the lifetime of the structure.

This approach ensures that the concrete works with, rather than against, their surrounding natural environment. This stands in stark contrast to the one-size-fits-all concrete blocks typically used in these contexts. “Nature does it better than we do,” Adi Neuman, head of design at ECOncrete, explains in Time.

One application of this concrete is shoreline protection, which helps protect communities from coastal erosion. ECOncrete’s product is also used to construct seawalls, moorings, and piles for waterfront infrastructure such as ports, marinas, and urban waterfronts. It also has offshore applications, helping protect cables and pipes while regenerating eroded seabed habitat. Since ECOncrete was founded in 2012, they have been working on R&D, commercialisation, and various projects including with the Brooklyn Bridge Park Corporation (2013), Port Everglades (2017), and the Port of Rotterdam (2018).

Municipalities and port managers looking to use concrete that lasts longer and is better for the environment and local marine ecosystem.

The Port of San Diego in California is one of the largest ports on the US west coast, with a $9.4 billion economic impact. It is responsible for upwards of 70,000 (or one in thirty) jobs in San Diego County. The Port is protected from storm flooding and erosion using a traditional structure known as a riprack rock mound. However, this system does not foster a diverse habitat for marine life.

The Port engaged ECOncrete through its Blue Economy Incubator to install its COSTALOCK Tide Pool Armor: a series of 72 interlocking pieces of green concrete ‘armor’ units. This reinforces the structural protection of the Port while promoting the restoration of local ecosystems and repopulation of marine organisms.

“By mimicking natural rock pools with beautiful water retaining features, the project will sustain valuable marine life while coping with climate change and urbanization,” Commissioner Rafael Castellanos, Port of San Diego Board of Port Commissioners, said in a statement. 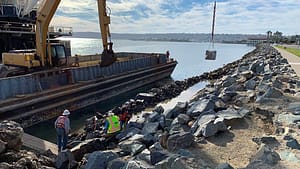 Image from Port of San Diego

Concrete is the most commonly used man-made material on Earth and, after water, it is the second most widely used substance on the planet. It is an important construction material used extensively in buildings, bridges, roads and dams.  Each year four billion tonnes of concrete are produced for construction and infrastructure of all types, with a considerable carbon impact. Decarbonising infrastructure is, therefore, key to reaching ‘Net Zero’ and transitioning to low carbon concrete will be central in achieving this.

Analysts expect the green concrete industry to grow 9.8% between 2021 and 2026.  This growth is welcome: traditional concrete has been labelled “the most destructive material on earth,” responsible for upwards of 8% of global CO2 emissions, the primary driver of climate change. Further, infrastructure can be linked to 70% of the world’s carbon dioxide emissions. Coastal and marine infrastructure, in particular, i.e., seawalls, bulkheads and breakwaters, can harm naturally occurring, abundant and diverse marine life and promote the dominance of opportunistic and invasive species.

The green concrete space is crowded, with both startups and incumbents chasing more sustainable alternatives. ECOncrete’s promise lies in its unique, validated products that address a key need for coastal regions. Not only is the technology stronger than conventional concrete, its intricate surface textures and chemical composition promotes biodiversity and marine life including the growth of seaweed, coral, algae and oysters. All this while complying with the industry standards of strength and durability and simplifying the manufacturing process. While it will be years before we can assess the full impact of their concrete technology, it is no small feat that their product exceeds levels of CO2 reduction among both the new and legacy companies working in the field.